A lot of find ourselves asking when do puppies stop growing? Whether it’s because our dog just seems to keep getting more and more massive with each passing day or because we’d hope they’d get bigger, it can be something of a mystery. We’re here to give you an extended answer to this simple question, in order to answer it as clearly as possible.

Quick Navigation
In General
Why So Fast?
How Can I Tell When They’re Done Growing?
Summary

In general, your dog will stop growing when they reach about eighteen months of age. This generalization has some caveats to it though, namely that it will depend almost entirely on the breed of the dog in question.

In actuality, for a medium-sized dog you’re most likely looking at around twelve to fifteen months for them to reach their full, adult frame. This might seem remarkably quick when you start calculating dog years, but most animals grow quite a bit more quickly than slow-maturing primates like humans.

Now, some medium-sized dogs with a heavier build might reach their adult length and height by a year, but still take another six months for the extra weight to catch up with them. It’ll vary from dog to dog almost as much as breed to breed.

Our smaller canine friends like Shih Tzu will generally be full sized within their first year however. Toy breeds and small terriers grow amazingly quickly to their full size and are ready and raring to go once they get there.

Larger dogs, like German Shepherds will generally fit into about the same frame as medium sized dogs maybe a few months longer and might take up to two years to really fill out their frame. Giant breeds, like Mastiffs and Great Danes on the other hand may take up to eighteen months to reach their full adult frame and up to three years to fully fill it out.

It can seem like your cute little puppy becomes a huge, slobbery monster overnight. This growth rate actually isn’t as unusual as you’d think, the fact is that when we measure things in human years most animals tend to grow much more quickly than we do.

One reason why dogs mature so quickly is that they have larger litters than humans. Animals which produce large amounts of babies tend to grow rather quickly and live for shorter periods of time than those who have fewer children.

One odd thing about dogs in general is that larger mammals tend to live longer, but the opposite is the case for dogs. While the large and giant breeds will tend to be puppies for longer, they’ll also have shorter lifespans in most cases. This has a lot to do with their metabolism and behavior, larger dog breeds are traditionally working dogs and their quick metabolisms and high activity levels burn out their lifespans quicker.

How Can I Tell When They’re Done Growing?

Not everyone knows the age of their puppy, perhaps it was a gift from a friend or a stray you rescued after finding it behind a store. Whatever the reason, there’s a few different ways to tell if your dog is full grown.

The first thing to look at is the paws, if they still look oversized then chances are your dog still has some growing to do. It’s widely known but it’s not a perfect indicator especially if your pooch is a mixed breed. Some dogs will retain some slightly oversized paws as they get older, but it’s pretty rare that you’ll find a dog with undersized feet.

Behavior may actually be a better indication of where your dog is it. Puppies will tend to lose that incessant urge to gnaw on anything that fits in their mouth and the break-neck enthusiasm for life as they get a bit older and more “mature.” When your dog stop teething, he’s probably nearing his final size quite nicely.

Once their figure is filled out properly, you can be assured that your dog is pretty much full-grown, and you won’t have to worry about them getting any larger.

If you’ve been asking yourself “when do puppies stop growing?” we hope that we’ve answered your question thoroughly. As you can see it varies from breed to breed and dog to dog. There will still be outliers that are a month or two quicker or slower, but in general once your dog has grown into its paws and becomes emotionally mature you’re looking at a dog which is no longer a puppy.

We hope you’ve enjoyed the answer to this question, and we invite you to leave a comment below if we helped you out or you have any addi​tional information. 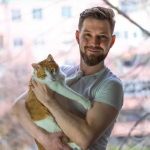 I'm a devoted pet parent to two lovely creatures – Charlie the Cat and Jimmy the Dog – a full-time deputy pet store manager, and an animal shelter volunteer. I've gathered knowledge about pets for almost a decade, and it all started in a small store called Jack's Pets.

2 thoughts on “When Do Puppies Stop Growing?”

This site uses Akismet to reduce spam. Learn how your comment data is processed.

Test Your Cat for Allergies!

Test Your Dog for Allergies!

Scroll to Top
We use cookies to ensure that we give you the best experience on our website. If you continue to use this site we will assume that you are happy with it.Ok